Episode 20: Breeding Behavior of the Lance Tailed Manakin of Panama with Emily DuVal 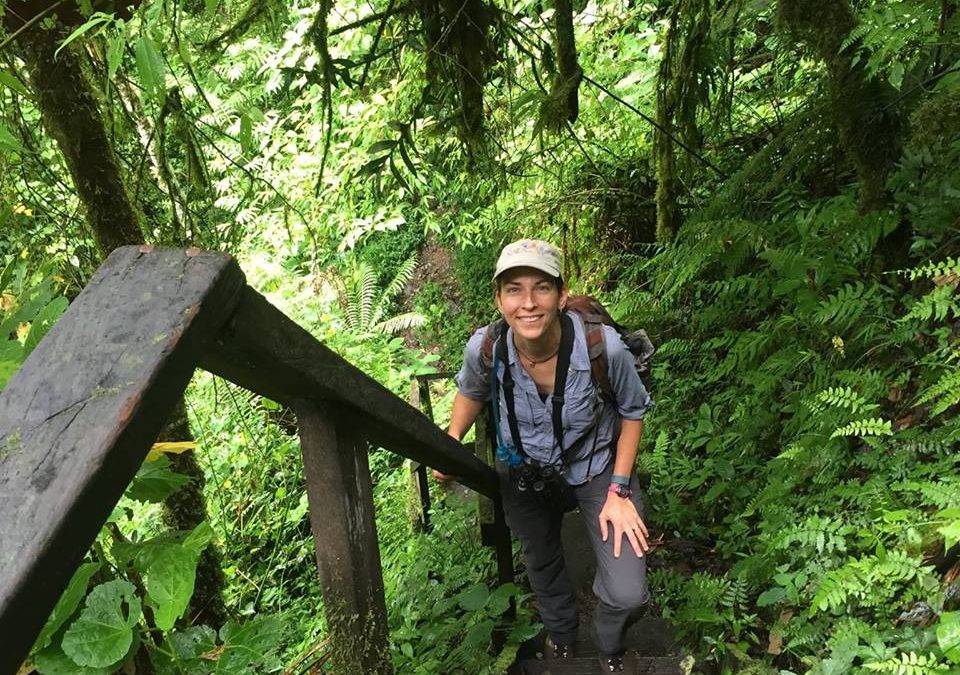 Our guest in this episode is Dr. Emily Duval whose Duval lab at Florida State University studies behavioral ecology, population genetics, and in the role of sexual selection in speciation.

Multiple mating, where one female bird copulates with more than one male is common throughout the bird, and animal kingdom. This ain’t easy, particularly in socially monogamous species (these include birds) operating under biparental care– both Dad and Mum take care of the egg.  Therefore, female birds need to be selective.  They want to increase the chances that their eggs will turn to offspring.  How do they do this? By mating with high-quality “alpha” males with good genetic resources.

In lekking species, males display for females, but do little else once they have mated. What about cooperation instead of competition between two males? This is the topic of Emily Duval’s “marvellous” work on the lance-tailed manakin, a small passerine bird found in Central and South America.

Dr. Emily Duval is a professor at Florida State University.  Her Duval Lab does work in behavioral ecology, population genetics, and in the role of sexual selection in speciation.

In this episode, we talk to this much feted, and much-cited professor about topics that would be a divorce lawyer’s nightmare: multiple paternity, non-optimal choice of mate, alpha and beta males, and the adaptive basis of female mate choice. More specifically, we are going to talk about the manakin of Panama, the lance-tailed manakin in particular, whose spectacular breeding dance makes time fly.

View the live cameras that has been installed by her lab here.

Watch a hapless female gaze at two male contenders.  Would that all females be accorded this worshipful dance?

Episode timeline with question and answers

1:00 Tell us about your work for a lay audience?

Cooperation and mate choice in wild birds. Complex social behavior and how it evolves.

2:00 What are the different types of breeding behavior in birds?

She talks about how a majority of birds mate monogamously.  Social monogamy versus genetic monogamy.  She studies cooperation amongst males in the lance-tailed manakins.  Duet songs for females.  Leapfrog dance for females. Why are the beta males participating in this cooperative relationship with the alpha male.

4:00 What is the benefit for the beta male? Why does he cooperate? Cooperating to compete seems like a contradiction.  What does it mean for alpha and beta males? Emily has been studying this for 23 years.  They cooperate because they increase their chances of going from beta to alpha males.  Different males take different routes to becoming the alpha male. Like understudies in theatre. Not all the betas serve under alphas.

6:00 She talks about genetic variability in birds.  How different eggs could come from different ‘Dads.’ The female can pick a mate for a variety of reasons.  Lance-tailed manakins lay only two eggs.  Males have little to do with the nest and later.  Why do female mate multiply?

7:30 Why did she study lance-tailed manakins? Because she was fascinated with cooperation.  It happens because of ‘relatedness’ where the older bird helps raise their younger siblings.  Dave Macdonald studied long-tailed manakins– who also dance for the female.

10:00 She talks about how she collected blood samples from the chicks, female and male, thus established who the Dad and Mom were.

11:00 The benefit of male alliances that stretch over six years.  The beta and alpha roles.  Only 30 out of 150 are alpha males and only 30 are beta.  “Everyone else is just there.”

12:39 Lekking species, exploded lek.  She says it is an bird equivalent of a “singles bar.”

14:40 She talks about research into the white-ruffed manakin. How males varied in their cooperative interaction.

16:42.  About laughing falcons— eating a coral snake.  And the note she wrote about it.  How one falcon ate the snake after placing it in a branch dripping blood and another ate it with the head still on. Emily talks about her paper on Laughing Falcon

19:00 How the laughing falcon eats snakes.

25:00 She worked on a fascinating study that seemed to suggest that birds were as influenced by their peers, somewhat like the “it” girls? She talks about it.  Females are three times more likely to mate with a male that they have seen other females mate with the same male.  Inexperienced females amplifies the effect.

Her paper on this behavior.

“Social context affects the performance and outcomes of many animal behaviors, and mate choice is no exception.”

28:00 For females, searching for a good mate is an investment.  She talks about how it varies. Females too spend a lot of time and effort.  She talks about a massive and complex study about how females choose.  They visit four males before choosing.  One female can visit a male up to 22 times before laying a clutch of two eggs.  Difference between younger females and older females. How male birds preen for male.

32:00 I ask about the human species and how this field lends itself (or not) to women? How has ornithology changed to adapt itself to women? What are the challenges that women researchers face? Emily’s lab has many women and is hugely diverse. How can ornithologists and researchers replicate the gender diversity that she has in her lab

Some of Dr. Emily Duval’s papers

Her work suggests that females mate multiple times when they have to choose inexperienced sires.