Episode 28: Of birds and birdsong with Dr. Samira Agnihotri 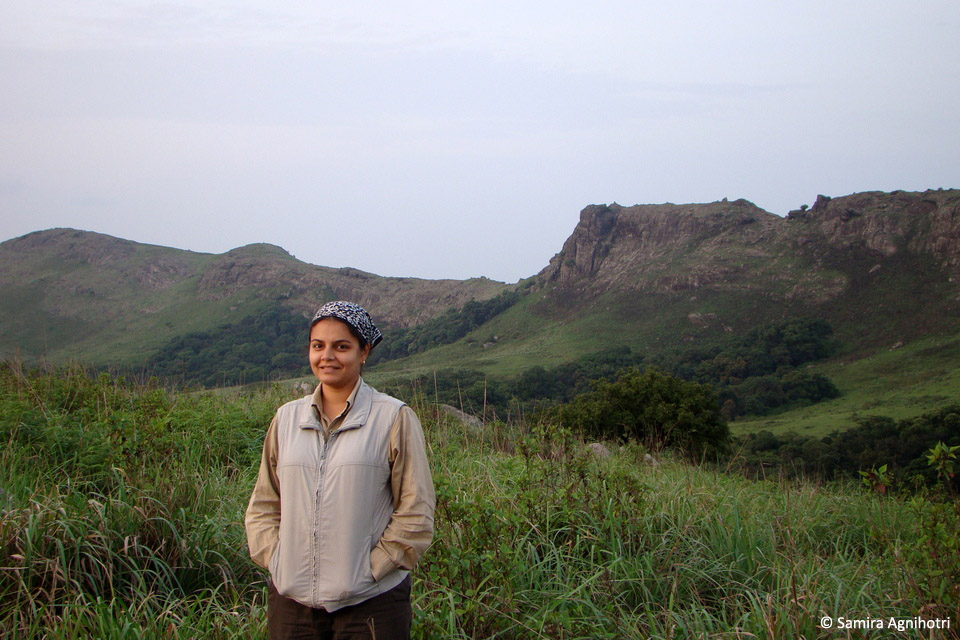 With us today is Dr. Samira Agnihotri, who has studied bird song, racket-tailed drongos and ethno-ornithology.   Dr. Agnihotri has worked in the Biligiri Rangana Betta or BR Hills from 2005 when she began to study birdsong while pursuing a Master’s degree in Wildlife Biology and Conservation from the National Centre for Biological Sciences. She then studied racket-tailed drongos, walking through the forests with a mike and recorder, and obtained her Ph.D. from the Indian Institute of Science. She followed up her research on drongos as a post-doctoral fellow at the National Institute of Advanced Studies. She is keenly interested in the traditional ecological knowledge of the Solega people and has dabbled in ethno-ornithologies, collaborating with linguist Dr. Aung Si, and is intent on documenting Solega knowledge and oral histories. Samira is also interested in nature education, and in exploring different ways to popularise the ecological sciences as well as encourage and aid the preservation of traditional knowledge systems. Samira is a member of Punarchith, a collective that works with farmers and rural youth in Chamarajanagar District. Currently, she works at the Office of Communications at IISc.

Below is a great introduction to Samira’s work from an article here in JLR Explore.

On an early morning walk in the BR Hills forest, a Solega tribal, who would accompany Samira to the forest every day, suggested that she do her PhD on the Racket-tailed Drongo. He jokingly observed that this bird had done its PhD on all birds, and that she must do her PhD on it. That turned out to be quite the prophecy, as she ended up doing exactly that. Racket-tailed Drongos are renowned mimics, and regularly imitate the calls of other species of birds with great accuracy; by doing this, they communicate with other drongos and also interact with other bird species. Samira’s study attempted to understand the functions of this vocal mimicry.

Throughout her work in the BR Hills, Dr Agnihotri has seen the Racket-tailed Drongo mimic 40 bird species, 3 mammals, 2 frogs and one insect. It has a large repertoire of its own calls as well which finds its way into the mimicry that it creates.

Here are some links to her research work.

She has written some cool articles for JLR Explore. Some snippets from her JLR articles below.

If the reader is still interested in the list of Solega bird names versus the western (and may I say, colonial) taxonomy of bird names, I would encourage them to take a look at our paper (Agnihotri & Si, 2012).  At first glance, it may seem that they tend to have names for birds that are large in size and brightly coloured (and therefore, easily perceived). And perhaps not surprisingly, none of the winter migrants are named. But they also have names for many birds based on just their calls, and many of these are small and plain coloured, or well camouflaged species!

Here are a few examples of Solega bird names that have interesting meanings: Kaana-kathale (“the darkness of the evergreen forest”) for the Black Eagle; Kaana-goravaa (“the herder of the evergreen forest”) for the Malabar Whistling Thrush; Sattuga-baala (“ladle-tail”) for the Asian Paradise Flycatcher; Thale-baasa (“combed head”) for the Brahminy Starling; Aralhakki (“castor bird”) for the Emerald Dove, from its ability to feed on the toxic seeds of the castor or Arale plant (Haralu in Kannada); and Giduga for the Black-shouldered Kite and the Common Kestrel, from their ability to hover in mid-air (here the “d” is retroflexed, like in the Kannada word kaadu for forest, and in the Hindi word sadak, for road).

Samira’s talks for a variety of audiences

Here is a Youtube video link of a talk she gave about vocal mimicry in birds that she gave for Nature in Focus.  It is about the racket-tailed drongo.

This is a profile-interview of her which talks about her journey and childhood. Below are some interesting things she says in the interview.

“Most of these knowledge systems are a part of the folklore or oral history traditions of indigenous peoples or local communities. Did you know that the world’s biodiversity hotspots are also the world’s language diversity hotspots? One hears so much about the former, and barely anything about the latter, in current discourse about conservation. In fact, the Soliga (Solega, to be linguistically accurate) language is also endangered, and contains such a comprehensive body of information, a veritable treasure!”

“I no longer subscribe to a top-down, protectionist approach to conservation, where the accepted dogma is that people and wildlife should always exist in separate geographical spaces. The Solega have lived in the BR Hills since centuries, if not more, and they have the right to demand a stake in the future of these forests. Their views on the ecology of the forest and conservation are rarely given any importance. They were subsistence hunter-gatherers and, traditionally, they never hunted tigers or elephants. It was first the British, and then the trophy hunting (shikaar) system that they left behind, that had decimated our wildlife, not our indigenous communities.”