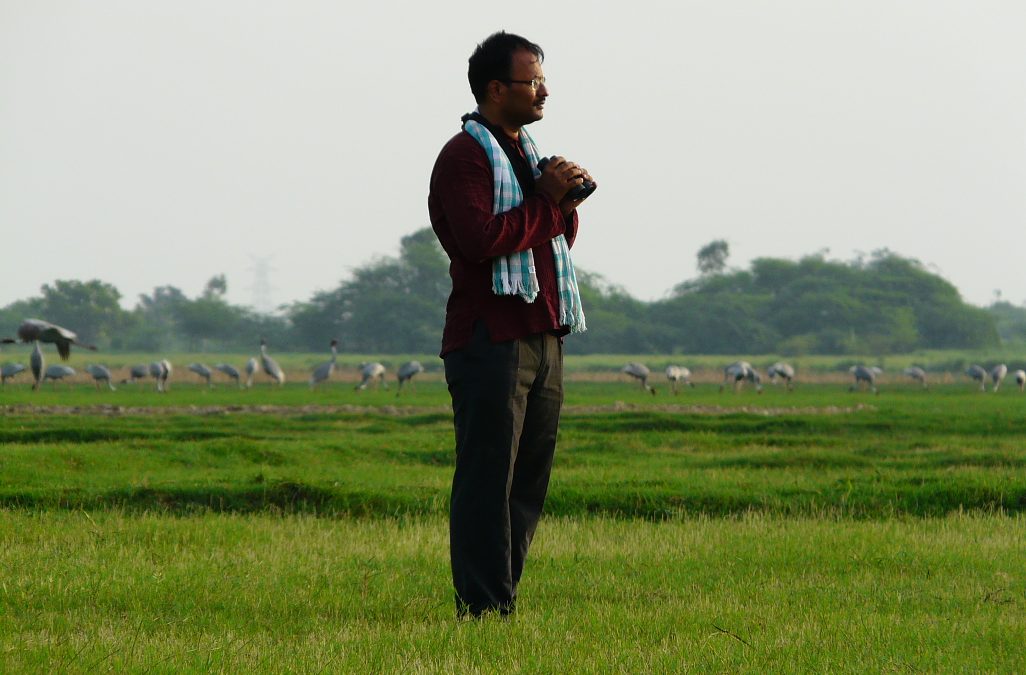 Our guest today is Dr. Gopi Sundar, who heads the international ecological journal, Waterbirds.  He is also a scientist in the cranes and wetlands program at the Nature Conservation Foundation (NCF) based in Udaipur.  Gopi has worked on waterbirds for over three decades, particularly on the Sarus Cranes of Uttar Pradesh.  In this episode, he talks about waterbirds and how they coexist with humans.

Dr. K.S. Gopi Sundar got pulled into the world of birds while in school when he was shown a Golden Oriole in the middle of Bangalore city. This experience was followed up by an unforgettable viewing of the Wandered butterfly and regular morning walks with the then Bangalore Birdwatchers Field Club. After a BSc in Environmental Science in St. Joseph’s College, Gopi went on to complete a gold medal winning MS in Ecology at Pondicherry University. Soon afterwards he was selected for a project on Sarus Crane ecology at the prestigious Wildlife Institute of India (WII) where he wandered the length and breadth of the country and witnessed the prodigious wild life that lived in India’s agricultural areas. His work with WII helped underscore the importance of small holder multi-cropped agricultural areas of northern India for a variety of bird species. With funding support from the International Crane Foundation alongside securing multiple grants, including his first from National Geographic, Gopi continued his studies as a PhD student at the University of Minnesota. He discovered that, quite contrary to existing literature, Uttar Pradesh’s farmlands had a diversity of birds that defied textbook knowledge. He then set up the Cranes and Wetlands Programme at the Nature Conservation Foundation in association with multiple non-profits, universities and government departments. Gopi initiated a multi year monitoring programme of large waterbirds in the agricultural fields of South Asia and collaborated with colleagues to initiate similar surveys in north-eastern Australia. This work helped cement the unusually high value of farmlands, unprotected community wetlands grazing lands in India, Nepal and Australia for a variety of birds. For his efforts at bringing attention to waterbirds and wetlands, Gopi was awarded the Zeiss Conservation Award, and was invited to Co-chair the IUCN Stork, Ibis and Spoonbill Specialist Group. He founded the online publication “SIS Conservation” that published peer-reviewed information on this fascinating but poorly studied group of birds. In December 2021, Gopi was selected to be appointed the Editor-in-Chief of the global journal “Waterbirds: the International Journal of Waterbird Biology”. He has over 50 published papers in national and international journals, was recently responsible for helping down-list the status of some large waterbird species that were incorrectly thought to be globally threatened and has expanded his work to urban areas from where he is documenting additional happy surprises by way of birds. Gopi serves on State Wildlife Boards and court appointed committees in India where he attempts to insert new scientific information to assist with development of reasoned and locally-relevant policy towards wildlife conservation. He also advises students working on wetlands and waterbirds in multiple countries with the aim of improving scientific information on poorly studied species and areas that have seen little to no scientific attention.

Gopi and his wife Swati are also farmers practising organic agriculture beside a lake in southern Rajasthan that has a breeding pair of Sarus and over 150 other bird species. When not studying birds, Gopi and Swati like wandering to new lands, photography, cuisine of all sorts, and blaming the Bangalore Birdwatchers Field Club for all their troubles.