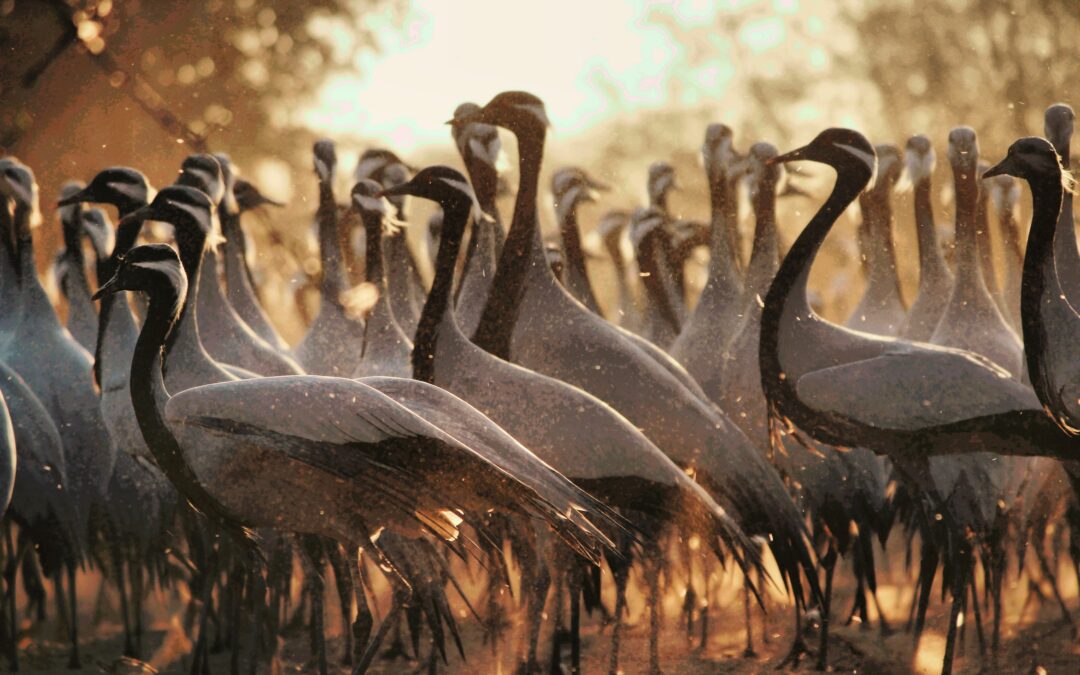 This episode is about demoiselle cranes congregating in a village in India.

Last month, on a trip to Rajasthan, I visited the village of Kheechan.  To get here, you have to fly to Jodhpur and drive two hours North.  The thing about this place is that every winter, some 20,000 Demoiselle cranes congregate here because they are fed morning and night with grains or jowar.  In this episode we explore the Demoiselle cranes that migrate to a Jain village in Western Rajasthan.  These are the smallest cranes among the 15 species of cranes in the world.  What’s interesting is the attachment that they have with the villagers of Kheechan.  Here, they have a daily routine.

Read about how a community feeds the cranes here.  And read about sacred spaces called orans here.

From here: “Demoiselle cranes have to take one of the toughest migrations in the world. In late August through September, they gather in flocks of up to 400 individuals and prepare for their flight to their winter range. During their migratory flight south, demoiselles fly like all cranes, with their head and neck straight forward and their feet and legs straight behind, reaching altitudes of 16, 000 – 26, 000 m. Along their arduous journey they have to cross the Himalayan mountains to get to their over-wintering grounds in India. Many die from fatigue, hunger and predation from golden eagles. Simpler, lower routes are possible, such as crossing the range via the Khyber Pass. However, their presently preferred route has been hard-wired by countless cycles of migration. At their wintering grounds, demoiselles have been observed flocking with common cranes, their combined totals reaching up to 20, 000 individuals. Demoiselles maintain separate social groups within the larger flock. In March and April, they begin their long spring journey back to their northern nesting grounds.

They are part of Indian lore and legend.  The crane formation was part of the Mahabharata.  Valmiki composed the Ramayana when he saw a hunter kill cranes that were occupied in a mating dance.